I finished up on the changes and tweaks I wanted to make to the design, new schematic below.  I think I have found a US based PCB house (in Nor Cal, no less!) that can do a run for not much more that what I would pay for the China based house I used last time.  I should have the boards in less than 2 weeks as opposed to close to 4 weeks.  Since I just finished it up today, and it’s Friday, I’ll wait till Monday to submit the design, giving me 2 days to look it over for any problems. 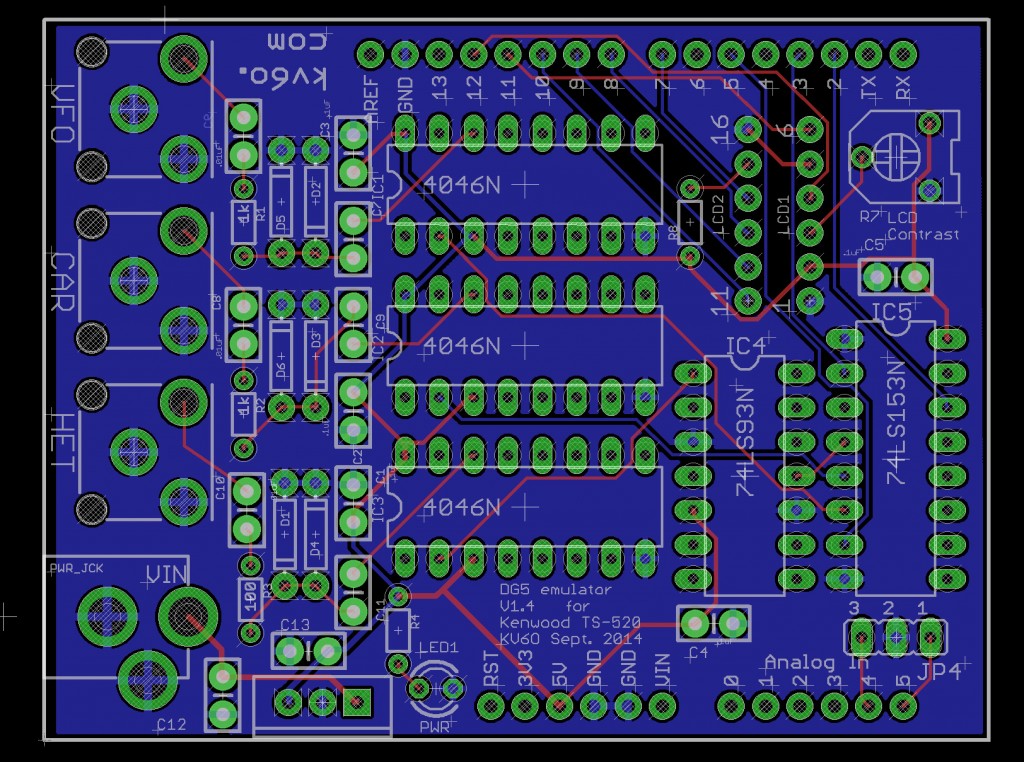 Few things I addressed in this version:

I looked at using a triple gang RCA jack, but couldn’t find one with an Eagle footprint, so I am sticking with the single jacks from Sparkfun for now. There is too much risk designing the footprint off the datasheet, part unseen.

New schematic.  Only difference from the one below should be the addition of the 7805 and supporting components.

Yippie!  The boards arrived last week and it was a few day’s before I could get to them.  They sure looked nice! 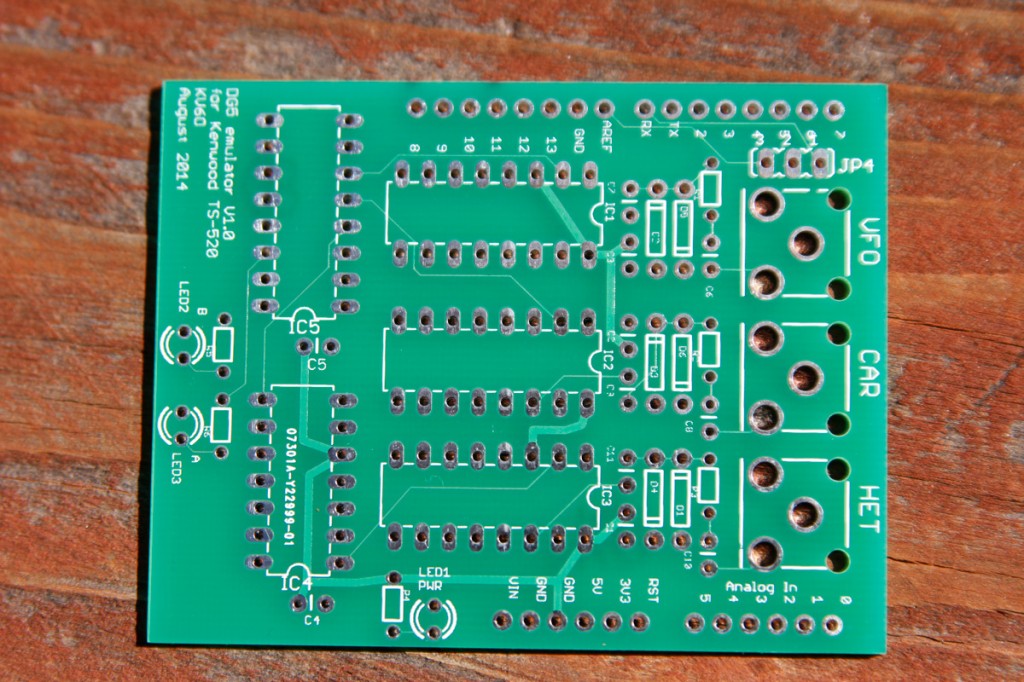 I was working on version 1.1 of the layout before these boards even arrived as I realized that the inputs for the VFO/CAR/HET were on the opposite side of the board from the USB connector – not convenient if you want to mount the assembly in a chassis.  But I was anxious to get this first version up and running to see if I got the schematic correct in Eagle.  And as is usual, I found a couple of minor problems. 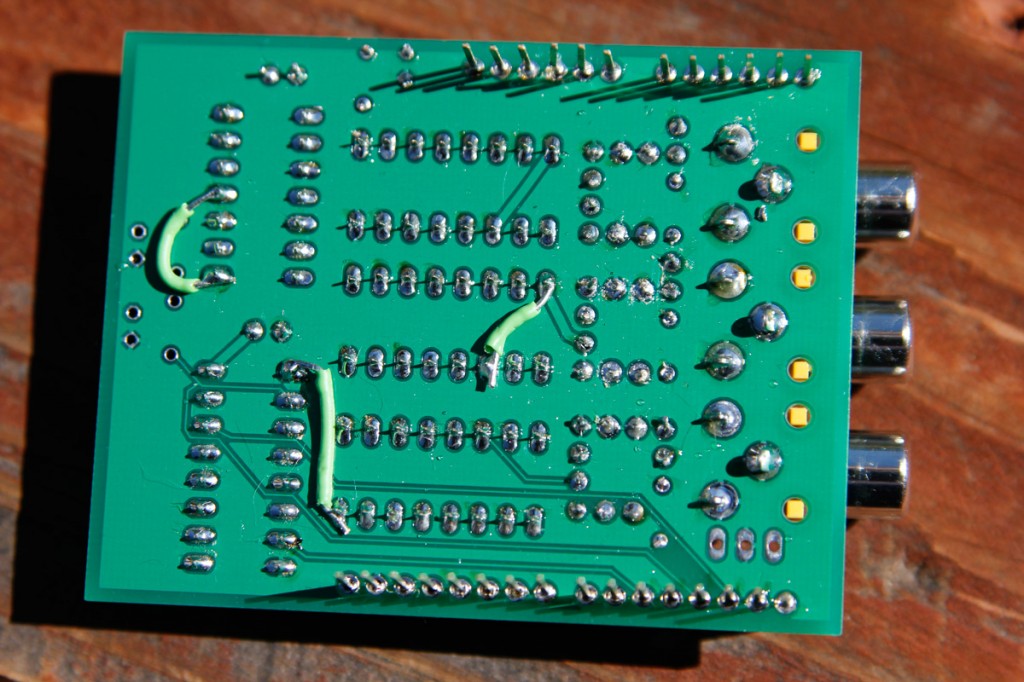 Here’s a view of the bottom of the populated board – note the 3 jumpers. Turns out I made a few mistakes – one was bringing a NET on the Eagle schematic over the pin and near the chip – missing the intended connection to the pin.  Another one was missing an air wire – a ground “island” was created without a connection to ground.  And lastly, I wired to the wrong output pin on the 74LS93 counter, winding up dividing by 4 rather than 8.  All three errors were corrected with jumpers.

There is also some silkscreen mistakes, I somehow incorrectly labeled the Arduino shield pins in two areas – not critical. 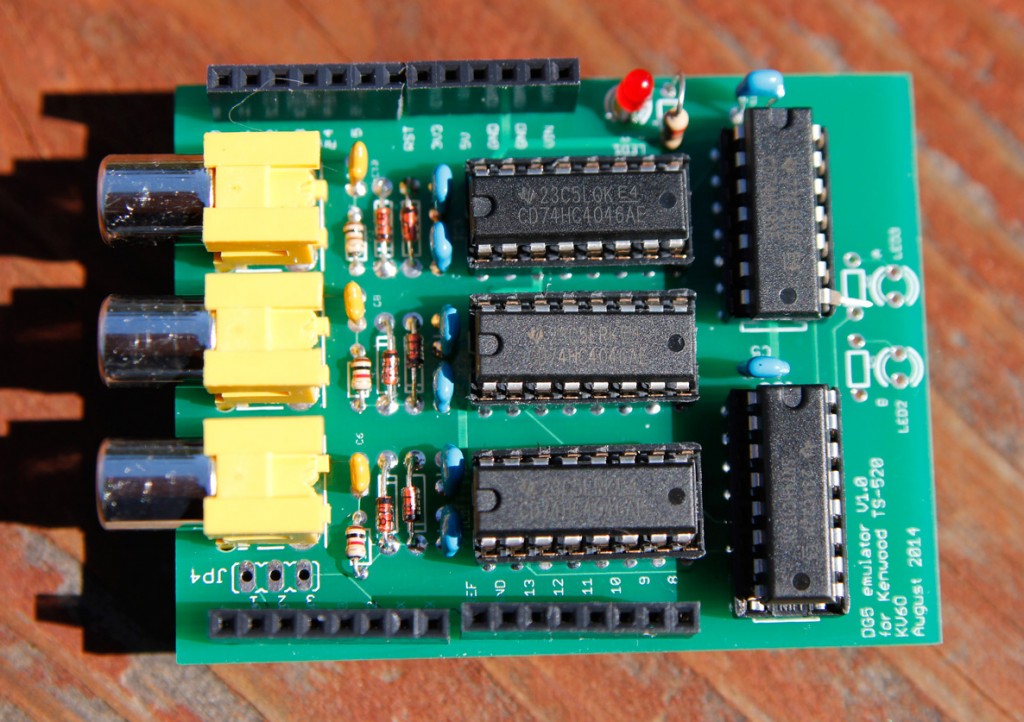 Here’s the board fully populated from the top.

Few other issues with this version that I have corrected with version 1.1:

As I work on the new version in Eagle, I am trying to keep in mind a few other things now that I have an actual, working shield.

Arduino’s with shields don’t lend themselves well to enclosures, so one possibility might be to make a larger shield that an Arduino plugs into that can slide into an extruded aluminum enclosure.  The Arduino would be a “daughter card” in this scenario, plugged in up side down on the main board.

My TS-520 still uses the prototype shown below since it’s already mounted in an enclosure and has the LCD display added, which was something I added after I sent in the version 1.0 PCB design.

My current schematic, with 2, 6-pin jumpers to go to a 16-pin LCD display (only the first 6, and last 6 pins are used on the display).

Latest Arduino code with LCD support (note the pins used for the LCD):

Note – I have only tested this with the Arduino UNO and Duemilanove boards.  There are probably issues with other Arduino boards, such as the Leonardo, as they use the internal TIMERs for USB emulation.

If you’re interested in the eagle files, drop me a line.

Here’s a quick video of my DG5 emulator prototype buttoned up in a project box.

Still waiting on my PCB’s to arrive on the slow boat from China.  I already have changes to make – the first version PCB has the 3 RCA jacks for the 3 signals from the TS-520S on the opposite side from the Arduno’s USB – not exactly the best for mounting in a box.  And I also have added the display since I sent in the design, so I’ll have to add that in as well.  The “shield” is getting a bit tight with the DIP IC’s and new requirements, I might either go to SMD devices (for the IC’s at least) or just make the shield bigger that an Arduino.  This might actually be an advantage, as a bigger shield would allow me to slide it in a Hammond type aluminum extrusion chassis, with the Arduino plugging in on top, upside down.

Got myself one of the AS9850 DDS modules that are available on eBay for around $10.  Looking at making an external VFO for the TS-520 with one of these, so a bigger box might be a good idea.